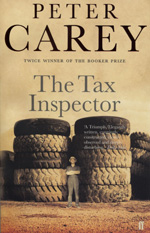 “Peter Carey is to Sydney what Joyce was to Dublin …an absolute master of language and of storytelling. Get your money on him as one of the great figures on the cusp of the millennium.”
—Thomas Keneally

“Peter Carey won the Booker Prize in 1988 with Oscar and Lucinda. His new novel is shorter, braver, more painful, and even better …If you only have time to read one new novel, make it The Tax Inspector.”
—Victoria Glendinning, The Times (London)

“The Tax Inspector is a glorious entertainment, storytelling at its best, a piece of richly comic invention told slant, upside down and inside out… Mesmerizing.”
—Boston Globe

“A brilliant powerful and dangerous writer. Dangerous because to read his book involves a loss of innocence.”
—Sue Gough, The Brisbane Courier Mail

“[Carey’s] work has a wild, chance-taking quality that seems to put him in harmony with the spirit of this age. If he keeps on as he has he will prove to be one of its finest novelists.”
—Chicago Tribune

“Explosive and enigmatic ….stunning. Carey makes of his tale an eerie tragicomedy, a novel of manners that edges, inexorably, into a chilling parable out of Edgar Allan Poe. We are often caught laughing at absurdities just before the onset of danger, before hilarity succumbs to menace. Only a writer as accomplished, as sure-handed as Carey, could keep these volatile elements in balance. The prose that won him Britain’s prestigious Booker Prize…cuts to the bone.”
—Newsday

“Much of Mr. Carey’s novel is funny, some of it is ghastly, and all of it is written with vigor and snap.”
—The New Yorker

“Charmingly zany…touchingly human. One can’t help being impressed by Mr. Carey’s unusual blend of violent humor, which never quite turns black but certainly passes through every shade of gray, shot through with brilliant splashes of psychedelic pink and chartreuse.”
—Christopher Lehmann-Haupt, The New York Times

“It is impossible not to admire the dedicated intimacy Carey brings to his characters. His novel is a profane parable with a stunning moral at its heart.”
—Detroit Free Press

“A Hieronymus Bosch painting of a book – dense, demonic, at once surreal and hyper-real. It’s fun to curl up with The Tax Inspector …Let it bowl you over.”
—The Philadelphia Inquirer

“Crammed with biting social commentary, brimming with energy, The Tax Inspector is unsettling, devastating and at times devastatingly funny. It dazzles and disturbs.”
—San Diego Tribune

“To say that Carey’s brand of story-telling falls somewhere between the fabulistic experiment of the 1960s and the ultra-realism of the ‘80s might be helpful, but it is not exactly fair. It is more accurate to say that he works a literary territory all his own, combining elements of absurdism, black humor, social satire and old-fashioned family saga. The writing reflects such authority and lyricism that it’s a pleasure to enter, without a quibble, Carey’s marvelously wacky, profoundly moving world.”
—Miami Herald

“This is a work of fiction that, with the unfailing elegance of Carey’s prose…[and] with its penetrating, cold-eyed gaze, makes something out squalor and evil from which you cannot take your own eyes away.”
—New York

“Carey’s antic worlds recall the pop art landscapes of Kurt Vonnegut and Thomas Pynchon in their clownish instability, their subservience to a cruel destiny. Beneath [his] hallucinogenic prose lurks the menacing sight of a satirist on the edge – a metaphysical joker. His flair for the unexpected but telling simile…and his powers of mordant description remain fresh.”
—The Nation

“The sheer exuberance and heightened visual power of Mr. Carey’s prose is, sentence by sentence, as brilliant and pleasurable as ever, no matter how dark his vision.”
—The Globe and Mail