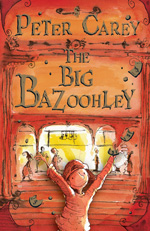 “A shiver runs down my spine at the opening words of The Big Bazoohley, Peter Carey’s first book for older children, because I have a feeling that this is a great book.”
—The Times (London)

“All the time I was reading The Big Bazoohley I didn’t know
whether to laugh or to cry. There was that rush of delight you get from
an intensely pleasurable experience and there was the disquiet of
seeing a Booker Prize winner’s massive talent moving towards my own
territory”
—Sue Gough, Brisbane Courier Mail

“He has the makings of a classic writer for children. He does not
patronise them; he sees the ways in which they are patronised by the
world….The joy of the story is that in the end ” without giving it away
” a human magic operates against all the odds, and shows that the only
predictable thing about life is its marvellous, mutinous
unpredictability.”
—Kate Kellaway, The Observer

“The elements of a Roald Dahl story: melodramatic events, manipulative
adults, clear-eyed children and slapstick humour (Sam practises for the
spaghettieating contest on “a bowl of slimy, tangled soapy string”).
Surely no reader can resist this tale of how the Perfecto Kiddo contest
came to grief”
—The Weekend Australian

“Booker Prize winner Carey is equally popular with children and adults.
The Big Bazoohley is already a bestselling classic, an exciting yet
humorous episode in the life of nine-year-old Sam.”
—Birmingham Post

“Sam is a wholly appealing hero and his kind, fun-loving parents know they’re lucky to have him.”
—The Gazette (Montreal)

Carey has written a story in the mould of Roald Dahl, rich in pathos,
humour, wacky plot-twists and curious characters who are sufficiently
threatening and eccentric to appeal to many young readers. With his
first book for children, Carey has produced a minor classic.”
—The Independent (London)

“Peter Carey’s first book for children is a witty tongue-in-cheek adventure ….
It’s told from the child’s perspective by a writer obviously at ease
with this age group, and the fact that it can be enjoyed on different
levels makes it ideal as a read-aloud.”
—The Australian

THE last Peter Carey book I reviewed was The Tax Inspector.
It was terrific. I didn’t mind saying so. Now he’s back with his first
kid’s book. It is also terrific but this time I do mind saying so. I am
only human. As a children’s author myself, I am saying it between
gritted teeth and with a nasty green tinge taking over my complexion.
All the time I was reading The Big Bazoohley I didn’t know
whether to laugh or to cry. There was that rush of delight you get from
an intensely pleasurable experience and there was the disquiet of
seeing a Booker Prize winner’s massive talent moving towards my own
territory. Carey’s first step has been into the eight-10-years market
and he establishes himself immediately right up there with the Maurice
Gleitzmans and Roald Dahls. Just like those two masters of the genre,
he writes without condescension and with the same laconic humour,
simple clarity, breathtaking inventiveness and nervous tension that
enchant adults and children at the same time. Well, what would you
expect? Carey’s protagonist, Sam, is the epitome of the ordinary kid
who has extraordinary adventures. From that conventional child-pleasing
format, Carey takes delicious liberties with plausibility. Those edgy,
fantasy-writ-real elements that make him such an exciting adult read,
come into their own when he writes for children. The storyline—based on
an incident involving his own son—is cunningly quirky. Briefly and
broadly, Sam and his charming but impractical parents are staying in a
posh Toronto hotel but have no money to pay the bill. Worried by their
plight, Sam sleepwalks out of the hotel room and into the loopy world
of the Perfecto Kiddo competition where he sees the possibility of
winning a big prize—the big bazoohley of his gambling father’s
dreams—and saving the family honour. Sam is such a natural, believable
kid that even adults will regress to see the world through his eyes.
Listen to Carey’s magical description of snow on a window ledge,
creeping up the glass “as if it meant to pull a soft white blanket over
the face of the hotel”. Let him re-create in your mind’s eye one of
Sam’s mother’s fantastic paintings that contain an entire city on a
canvas the size of a matchbox, chill at Sam’s abduction by that creepy
pair, George and Muriel, cheer at the moment of ultimate rebellion when
Sam throws the spaghetti, sigh with relief when everything works out.
In short, it’s a great read. “Impossible to put down,” says the puffery
on the back cover, and for the first time ever it’s absolutely true. Oh
Carey, you meanie, wasn’t the Booker Prize enough? Do you have to stage
a takeover in the junior league too? I think it’s time the rest of us
called our shop steward to instigate a demarcation dispute. CAREY:
Writes with laconic humour and clarity.
—Sue Gough, Brisbane Courier Mail