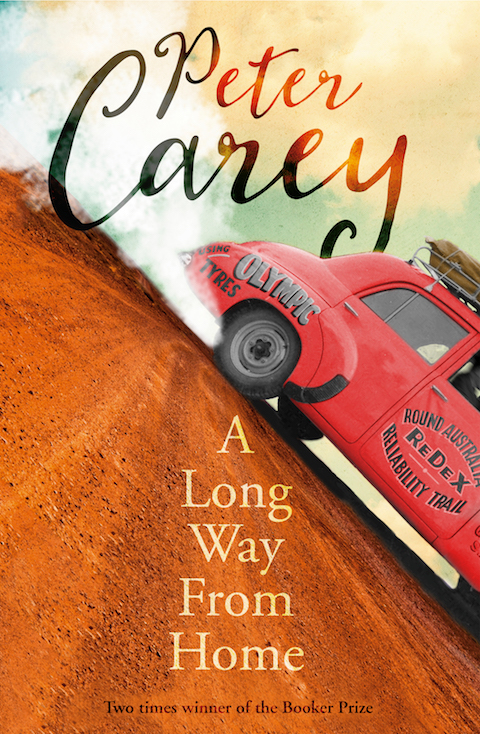 What a delightful writer Peter Carey is, and how varied are the delights he offers. A Long Way From Home . . . displays many of the typically polychromatic Carey pleasures. There’s the picaresque plot . . . the fascination with forgery and trickery, secrets hidden and revealed . . . the wedding of a deeply comic vision to an acute sense of how all history . . . is a record of barbarism . . . Above all, though, there’s the supple and musical prose, possessed of a distinct rhythm and filled with flashes of poetic brilliance . . . It’s one of Carey’s best, and boldest, efforts yet.  Anthony Domestico, Boston Globe

A Long Way from Home is a novel full of riches. The road race propels the plot along, but it’s really a book about cultural identity, about family, about the ability to empathise with others. As such, it’s hugely relevant for our times. Arminta Wallace, Irish Times.

A major work and an exciting one; it sprawls, but not uncontrollably. The tragedy is deep and affecting, but even in pivotal moments, it is neither unrelenting nor unrelieved…. Like the best of his books, this one keeps the reader in its grip with sharp turns of plot and muscular language. Helen T. Verongos St Louis Post-Despatch

A Long Way from Home reminds us that great novels are not ideological—neither exploitative nor excessively well-meaning—but tough-minded, complex admissions of failure, guilt and confusion. Geordie Williamson, The Australian

With all its inventive momentum, all its pleasurable beats, the fast pace of the race, the scenery unfurling, the novel [is] a journey into Australia’s broken past.  Craig Taylor, New York Times

An ebullient comic caper. . . . Intensely engaging in more ways than one, [a] high-octane novel. Peter Kemp, The Sunday Times (UK)

From Australia to North America to Africa to South East Asia indigenous peoples have been subjugated and killed just because they’re considered less than human or in the way. In a A Long Way From Home Carey has slyly taken what appears to be another humorous novel and turned it into something else, before the reader can even notice, and addresses this issue brilliantly.  Richard Marcus, Seattle Post-Intelligencer.

Peter Carey deserves the Nobel Prize in literature for lifting the heart. The Sunday Telegraph (UK)

We can think of any novel as a cloud of life matter swirling around the vortex of a question. In A Long Way from Home, all this stuff  … churns around a question appropriate to a Canadian audience as well. Let’s say you’ve inherited the hands of a murderer. What are you supposed to do with them? Jade Colbert, Globe and Mail (Toronto)

His best novel in years, maybe decades.—Alex Preston, The Observer(UK)

A Long Way From Home finds an ingenious way to reflect upon the original sin of dispossession and its on-going consequences . . . Carey’s enduring fascination with fakes and forgers takes on a new and potent meaning . . . Willie’s experience of deracination and the novel’s admirable undermining of its own nostalgia do not suggest any simple resolution, but they do lead to its necessary and humbling final recognition .  James Ley, Sydney Morning Herald

Not since True History of the Kelly Gang has he seemed so on-song.

He’s long been concerned with illegitimacy in the form of (white) confidence tricksters and outlaws . . . but here it’s culturally appropriated falsehoods that are called into question, and ‘horrendous’ deeds brought to light. Lucy Scholes, The Independent (UK)

Captivating . . . We barrel along anarchically, marvelling at the elegance of Carey’s plotting and the explosive joy of the storytelling . . . Carey turns the novel into a staging ground for his own merciless excavation of Australian history. Patrick Flanery, The Spectator (UK)

I couldn’t have imagined that a car race could be so enthralling. The Guardian

A major work of fiction by the writer who will probably be regarded, in a hundred years, as the leading Australian novelist from the early part of the twenty-first century. . . . A highly enjoyable reading experience. Paul Giles, Australian Book Review

One of his best in recent years . . . a love letter to an Australia that no longer exists.
Stephen Romei, The Australian

This picaresque comedy goes thematically deeper as it heads into the Outback. The antic tone of this 14th novel by Australian-born Carey belies its serious ambition. The comic spirit slyly suggests Shakespeare, an inquiry into identity and the farcical human existence. . . . Carey’s novel raises issues of culture and race that carry a thoroughly contemporary charge. Kirkus Reviews (starred review)

The trio’s odyssey, in addition to being a rollicking adventure, leads to a startling exchange of worlds. Bigotries are confronted. Hidden histories are revealed.  Michael Upchurch, Seattle Times

One of Australia’s greatest authors . . . Carey employs both a multi-voice narrative and a continent-spanning car race to emulate the disparate voices and fits and starts that comprise Australia’s history. Highly recommended.  Library Journal (starred review)

… not a word wasted, and yet as suited to the storytelling and mythic register, with the ability to range across space and time and compress epic events and tragedies into legend, as any Homeric verse. Claire Corbett, The Monthly

The two-time Booker winner is in effervescent form . . . Carey excels in this fizzing, darkly comic novel. – Jason Steger, The Age